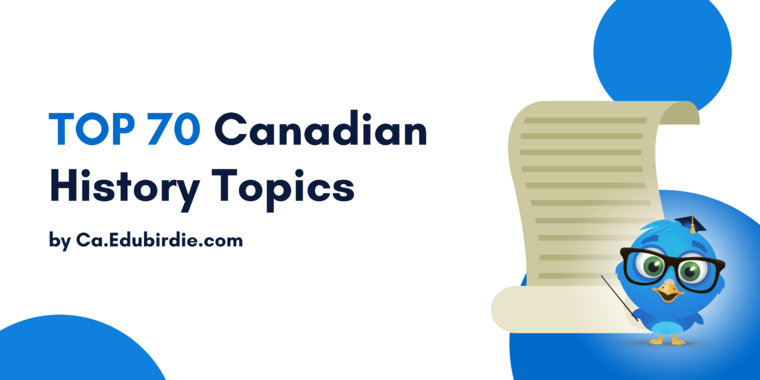 Without a doubt, the history of Canada has a plethora of unique and significant events. As the boiling pot of different cultures, Canada is proud to be the land that has seen it all and fought its way through rebellions, failures, noble victories, and the unity of people. It also makes a list of interesting Canadian history topics. Starting with Garneau's Histoire du Canada to the romantic personality and literary works of Leonard Cohen, there is always something that both young and old will enjoy.

Looking through Canadian history topics and if you ever need additional history homework help, we are here to help you.

Of course, as a high school student, you might like to write about controversial topics as you have to deal with topics on the history of Canada. Yet, it might not be as easy as it seems. For example, if you want to explore the Canadian Indian residential school system, you will have to approach not only political but also ethical and religious aspects. It means that you must operate with various facts and present information based on clear evidence.

Therefore, it is much safer to focus on the history of hockey in Canada or talk about how the Maple Syrup is distributed all over the world. You can order geography homework help to write the history of a particular area.

Take a look at these topics that will be helpful to brainstorm some ideas for your Canadian history project:

You can use these topics as the starting points that cover various aspects of Canada's history. Remember that it must inspire you and represent something that you know well. If you are not sure about your topic, talk to your school teacher and think of a good subject together.

Here are some history essay topics that you will find interesting for your essay:

Now that we have some good history research paper topics, it is good to learn how to ensure that you are not missing anything in terms of writing rules.

As you approach Canadian history or anything that requires analysis and understanding of ideas, follow these simple rules:

Remember to check your sources and formatting to avoid any plagiarism issues. Take your time, read our Canada's history topic ideas, analyze, start with an outline, and you will be able to write an amazing paper!