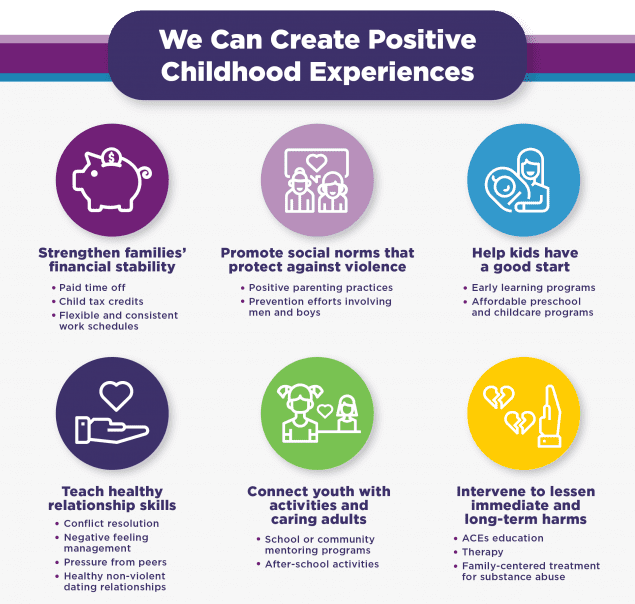 For many families, potentially traumatic events can affect a child's health and behavior. Events like these are referred to as ACEs―Adverse Childhood Experiences (ACEs)―and they are more common than you may think. Fortunately, we also know that safe, stable, nurturing relationships with caring adults can buffer children from some of this harm and prevent ACEs from happening in the first place.

Preventing adverse childhood experiences (ACEs) can thwart some of the leading causes of death in adults, according to a study published Tuesday in the Centers for Disease Control and Prevention’s (CDCs) Vital Signs. These include heart disease, cancer, respiratory diseases, diabetes and suicide.

Such efforts are critical to addressing multiple public health and social challenges and to improving the lives of children, families and communities, the study noted.

“It will take all of us working together to change environments and behaviors to stop ACEs from happening in the first place, and to lessen the harms for those who have experienced ACEs. There is a role for everyone: parents, families, neighborhoods, spiritual communities, business and government,” CDC Principal Deputy Director Anne Schuchat, M.D., said in a news briefing Tuesday.

According to the report:

Overall, 61% of adults noted at least one type of ACE, and 16% experienced four or more types. Those with the most ACEs had higher odds of having chronic health conditions for overweight or obesity than those reporting no exposure. In addition, the odds of depression, being a current smoker and socioeconomic challenges — including current unemployment — all were higher among adults with the most ACEs.

ACEs have been linked to increased risk for alcohol and substance use disorders, suicide, mental health conditions, heart disease, other chronic illnesses and health risk behaviors throughout life.

“The bottom line is this: Adverse childhood experiences produce toxic stress that can impact people all their lives. But ACEs are potentially preventable by creating safe, stable, nurturing relationships and environments for all children, families and communities,” Dr. Schuchat said.

Prevention strategies also are linked with higher academic achievement and reductions in suicidal behavior, arrest and incarceration rates and substance use in adolescence and adulthood.

“Clinicians are busy and may or may not incorporate ACEs into their practice,” Dr. Schuchat said. “But we think it’s very important that they do — both pediatricians in terms of evaluating the children — and screening the parents as well, because we know that this is one of those issues that can (cross) generations…So we hope that clinicians will take the time to screen and refer. We also think that incorporating principles of trauma-informed care in that clinical encounter can be very helpful at the time of the event and then going forward.”

How can we prevent adverse childhood experiences?

ACEs are preventable. Creating and sustaining safe, stable, nurturing relationships and environments for all children and families can prevent ACEs and help all children reach their full potential. CDC has produced a resource, Preventing Adverse Childhood Experiences (ACEs): Leveraging the Best Available Evidence, to help states and communities take advantage of the best available evidence to prevent ACEs. It features six strategies from the CDC Technical Packages to Prevent Violence.

Raising awareness of ACEs can help:

Let’s help all children reach their full potential and create neighborhoods, communities, and a world in which every child can thrive.