One’s ideas about certain world aspects form the basis of opinion. Developing a personal attitude towards something or someone is necessary for proper character’s growth in modern environment. Social interactions are equally important for every human being and it is impossible to advance close social ties with other people without expressing one’s perspective. That is why opinion essay became popular homework task in schools. It teaches young people to form and express their judgments regarding various things or events. Every individual’s personal and professional lives have this skill as the inseparable part. Everybody feels more comfortable if the ability to express their opinion along with indirect convincing other people is developed sufficiently.

How Should I Express My Opinion?

Let’s imagine any controversial subject that does not have a definite solution. It can be anything, either abortion rights or Canadian immigration policies. Absence of the final perception is possible because different people perceive the situation in their specific manner, thus, they have personal belief. Also, they want to convince opponents that their point of view is the only correct one. But before developing the argumentation, you need to express viewpoint explicitly.

Parts of an Opinion Essay

Knowing the basics of opinion essay structure is the first step to becoming reputable expert in any chosen sphere of knowledge as these rules are universal.

This part serves as the opportunity to grab the reader's attention using a catchy way of introducing the chosen topic. Some general though very brief background may be provided here to explain the context for understanding the essay’s purpose.

One or two sentences state the main claim and reasons that allow its expansion. This small but important section is responsible for the entire essay’s effectiveness. It is obligatory to spend enough time during re-writing thinking over the topic and creating good thesis that reflects all your claims and clearly states your position. An inappropriately described statement results in audience are missing your opinion’s key aspects.

They must be interrelated and dwelling on a certain element of the essay's thesis. Discuss only one idea within one paragraph so the reader won’t be confused. Each paragraph essence is mini-essay somehow. It should have fixed structure: a topic sentence that reflects thesis, provide examples or supporting evidence proving the validity of claims, include personal interpretation, finally, end this part of discussion with concluding sentence that leads to the next aspect of thesis. The number of paragraphs is at the author's discretion.

This is the easiest part of almost finished personal opinion essay if all sections above are followed properly. Nothing new can be introduced here. Only restatement of previously expressed opinion is needed here in light of main arguments’ summary and all provided evidence. It may include questions to readers or certain suggestions that emerged after discussion of claim along with supporting arguments. Finish your essay effectively so reader remembers it!

How To Write An Opinion Essay Good?

There are multiple hints that make your essay more appealing than Martin Luther King’s speech. Some tips are obligatory and relevant not only for homework but for any written communication. Here are seven writing tips that are helpful in obtaining reader’s appreciation:

Many people think that videogames are harmful, thus, should be banned immediately. The most popular argument is that modern computer entertainment promotes violence contributing to affected moral values of youth. To my mind, computer games are in fact useful since there is no evidence that these products build violent behavior model, while the positive effects include learning along with relaxing potential.

I strongly believe that exposure to realistic depiction of violence in games has no effect on human personality. Even children differentiate fictional environment from real-world and realize where specific behavior models can be applied. Dr. Zendle from the University of York conducted scientific experiments in 2018 but did not detect aggression increase in participants who played in realistic cruel combat games. Moreover, as for me, the possibility to adopt violent way of behavior completely diminishes the necessity to demonstrate cruelty in real life.

I consider such games possessing as much violence like many other objects of art in the modern world: films, books, pictures, etc. All the mentioned objects are treated as art that possesses deeper meaning and value. At the same time, many modern video products such as Witcher series demonstrate developed plot, aesthetic value, and strong moral component. I think that such activities may be compared to books and films in terms of their entertaining and learning capabilities.

In conclusion, it is clear that such entertainment demonstrates a rather high level of violence due to increased realism and improved graphics. However, it does not mean that they should be banned since all other art pieces, such as films and books, sometimes demonstrate even higher violence level. Positive characteristics of electronic games such as relaxation and entertainment need to be studied instead. However, the appropriate gaming time should be considered since uncontrolled exposure to computer monitor may indeed be harmful. 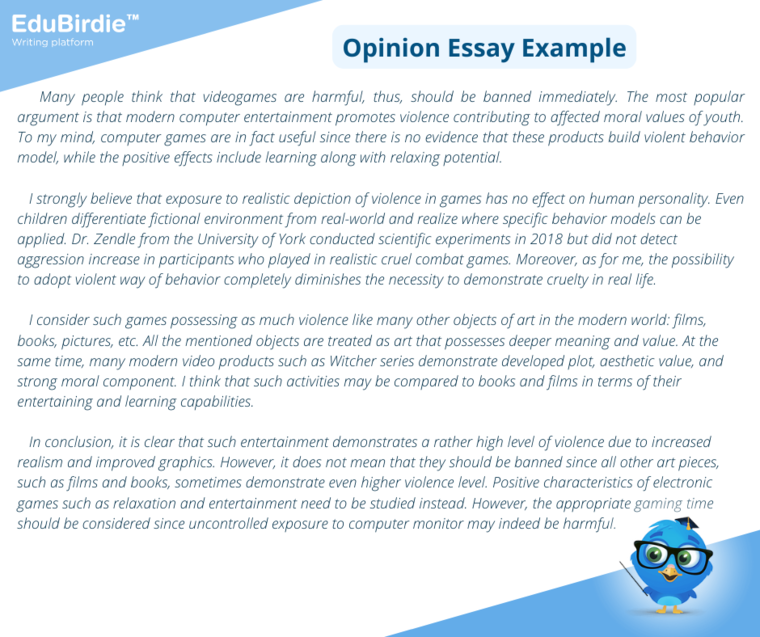 Developing Opinion Is Hard But Exciting

Following these simple rules and constant practicing to compose a good opinion essays on various topics is useful not only for good grades in any Canadian university but in personal life as well. Ability to formulate and organize one’s thoughts is equally needed for both English classes and communications. Our team is always ready to assist you in composing a strong statement on any controversial topic so that reputable philosophers – even your professor – would change their views and stick to your perception of the situation. Remember that written words are extremely powerful if properly arranged so don’t hesitate to grab the opportunity and get professionally written opinion essay from our experts!