How to Write a Comparative Essay and Make It Efficient

Learning how to write a comparative essay is a major as well as basic task of colleges and universities alike. Topics can wildly differ, from comparison of liberalism in Canada and the US to similarities and differences between reading and watching TV. Level of complexity depends on your educational level as well as major, but rules of writing are identical. Reason why writing comparative essays is so important is that they teach you how to analyse objects in all their entirety, drawing similarities between them before making a rational and evidence-based decision on which of them is better, more harmful, more interesting, etc. There is a clear structure showing how compare and contrast essay must look like, and it’s crucial to know about it if you want to get the best grade.

What Does It Mean and What’s The Purpose?

Compare essay is a piece of writing that provides similarities or differences analysis of two or more objects, determines which one among them corresponds to the outlined criteria most. Purpose here is to prove that something should be chosen among other objects based on some requirements — for example, you can prove that one idea is more logical, more attractive, or on the contrary, less popular than another. Such analysis develops critical thinking and makes sure that your future decisions are supported by evidence. That’s why learning how to write a comparative essay is essential regardless of your education: you can be a student at McGill University or a freshman at college in Red Deer, your comparative essay writing skills will be evaluated in similar ways because knowing how to analyse and compare/contrast objects is useful in all possible life spheres.

There are two major ways in which you can write comparative essay, alternating and block. Let’s regard them both so you could understand their peculiarities and decide on the one you like best.

Comparative essay introduction is the same for both methods. You introduce your topic, mention some basic facts to intrigue your readers, end it with a thesis. Differences start in the body. Alternating method means that in the body you’ve developed for your paper, you’ll be focusing on a chosen point for comparison at a time and analyze objects A and B together in each paragraph. Let’s imagine that your task is to compare Domino’s and In & Out pizzas. This is the kind of comparative essay outline you might have. Comparison essay format:

Block method is different since it entails comparing object A in the first paragraph and then focusing on object B in the second. Here, you’re basically regarding two objects separately: the most important thing is to add a few sentences that would link them both in paragraphs about object B. Still, sounds confusing? Check the outline below, it’ll help understand how to write a comparative analysis essay by using this method.

Now that you’ve learned how to structure body of comparative essay, it’s time to regard what introduction and thesis should entail. Don’t know how to start a comparative essay? It’s a common problem but easily solved.

First, pick your topic. Add some hook into the first sentence of the introduction to immediately intrigue your audience. Then, name two objects you’ll be comparing; provide briefly their background description. For instance, with aforementioned pizzas example, you can mention how both companies are very popular, also have a long service history. That’ll be more than enough.

Comparative essay thesis is most important writing aspects. Here, you should state the main opinions. Following mentioned example, you should say that one pizza is better than another, then provide reasons why. Treat opposite sides well, as if they are present! You should always be objective. Let’s check five comparison essay thesis examples.

Seeing something is always better than merely reading about it, no matter how detailed it is. We’ve already detailed previous example, so let’s pick thesis #3 and write short sample essay on it. Note that in actual academic setting, this essay would have to be longer as general comparison essay length is five paragraphs. 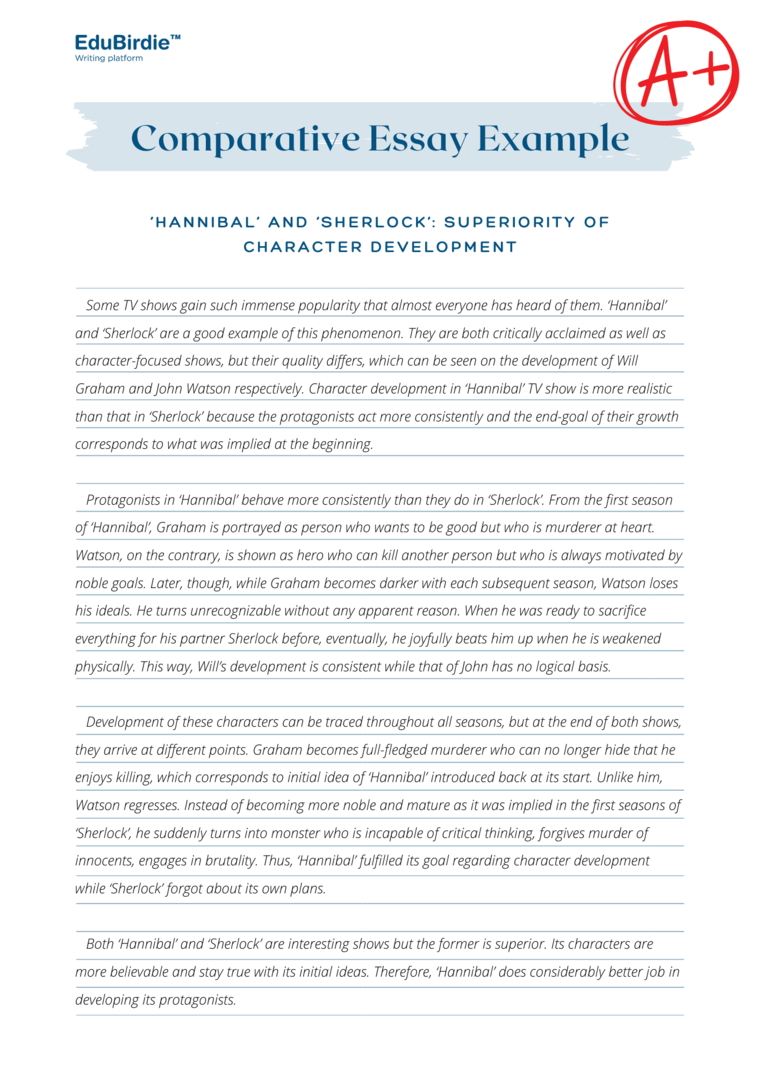 Some TV shows gain such immense popularity that almost everyone has heard of them. ‘Hannibal’ and ‘Sherlock’ are a good example of this phenomenon. They are both critically acclaimed as well as character-focused shows, but their quality differs, which can be seen on the development of Will Graham and John Watson respectively. Character development in ‘Hannibal’ TV show is more realistic than that in ‘Sherlock’ because the protagonists act more consistently and the end-goal of their growth corresponds to what was implied at the beginning.

Protagonists in ‘Hannibal’ behave more consistently than they do in ‘Sherlock’. From the first season of ‘Hannibal’, Graham is portrayed as person who wants to be good but who is murderer at heart. Watson, on the contrary, is shown as hero who can kill another person but who is always motivated by noble goals. Later, though, while Graham becomes darker with each subsequent season, Watson loses his ideals. He turns unrecognizable without any apparent reason. When he was ready to sacrifice everything for his partner Sherlock before, eventually, he joyfully beats him up when he is weakened physically. This way, Will’s development is consistent while that of John has no logical basis.

Development of these characters can be traced throughout all seasons, but at the end of both shows, they arrive at different points. Graham becomes full-fledged murderer who can no longer hide that he enjoys killing, which corresponds to initial idea of ‘Hannibal’ introduced back at its start. Unlike him, Watson regresses. Instead of becoming more noble and mature as it was implied in the first seasons of ‘Sherlock’, he suddenly turns into monster who is incapable of critical thinking, forgives murder of innocents, engages in brutality. Thus, ‘Hannibal’ fulfilled its goal regarding character development while ‘Sherlock’ forgot about its own plans.

Both ‘Hannibal’ and ‘Sherlock’ are interesting shows but the former is superior. Its characters are more believable and stay true with its initial ideas. Therefore, ‘Hannibal’ does considerably better job in developing its protagonists.

Still Not Sure How To Write? EduBirdie Will Help!

Sometimes writing an essay turns into torment that you wish to be over. If so, EduBirdie is always ready to help with essay writing! As you can see, comparative essay requires following a set of rules, so if you find them tiresome, just give us your instructions, our writers will follow them entirely. They have completed tests as well as written sample essays before being hired, and since then, they’ve dealt with numerous orders. Check their reviews that our platform provides, pick your writer, and forget about your concerns. We’ll write most perfect comparative essay that’ll leave your professor impressed.